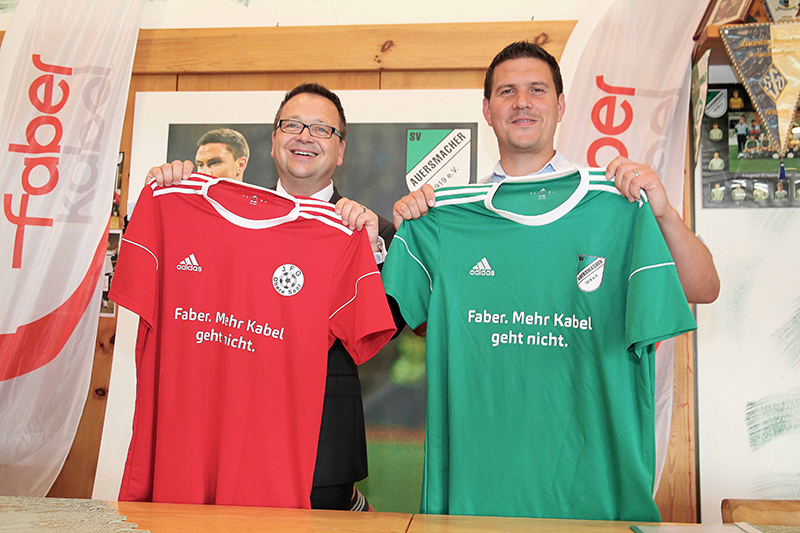 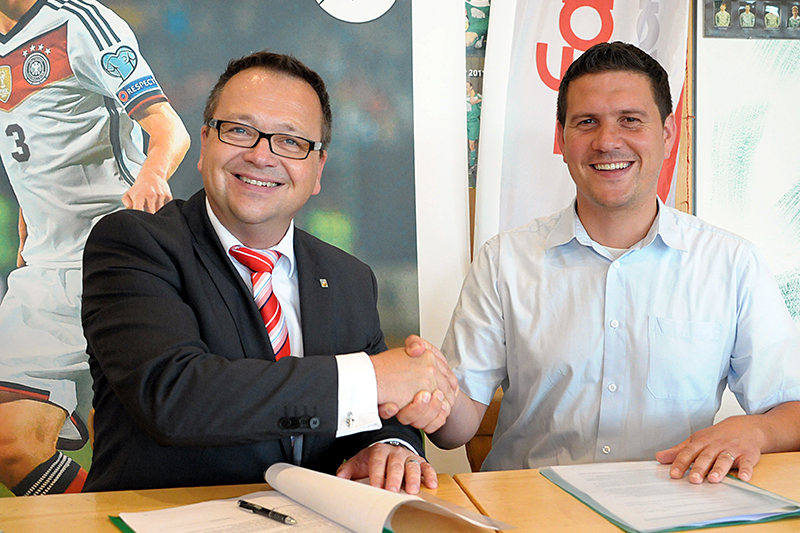 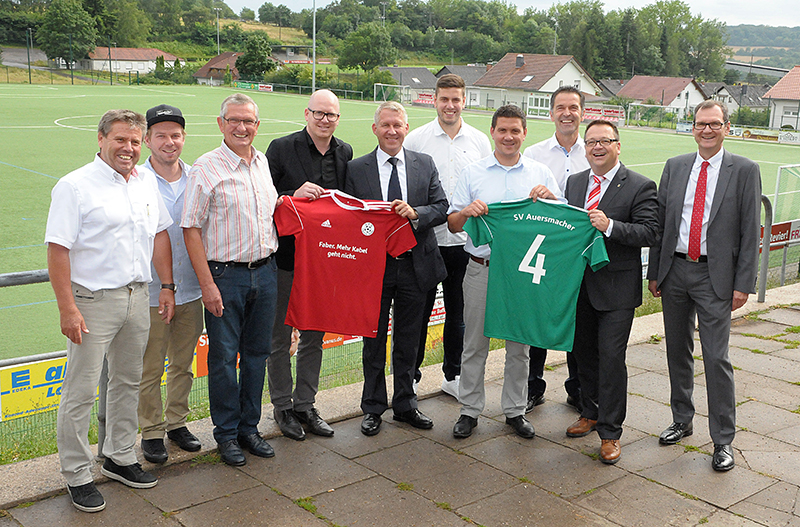 Faber will be supporting the SV Auersmacher sports club and soccer team as one of the main official sponsors for the coming three years. The contract was officially signed and the jerseys were handed over last Tuesday in the presence of the company’s entire management board and the executive board of SV Auersmacher.

Joachim Czabanski, CEO of Faber, gave the following reasons for this commitment: “Our company is one of the largest cable distributors in Europe and enjoys high name recognition and a good image in the industry. But in contrast to consumer brands, specialists like Faber are less well known outside professional circles. We are a classic hidden champion – even in the Saarland region. It is for this reason that we have decided to support the club with this long-term commitment. We regard this as a meaningful investment and valuable building block for raising the profile of our company. At the same time, we are also honouring the great socio-political engagement of the Auersmacher sports club as a company from the Saarland.”

SV Auersmacher numbers amongst the most important and tradition-steeped soccer clubs in the Saarland. The home club of national player Jonas Hector attaches particular importance to youth work. “This goes very nicely with our company”, says Joachim Cazbanski.

Club chairman André Hemmer thanked the board of Faber. “This is a wonderful affirmation and appreciation for all the people in our club who work as volunteers and invest their spare time. We have unfortunately lost a sponsor unexpectedly at short notice, which presents an association that is run on a voluntary basis like the Auersmacher sports club with sudden and unforeseen new challenges. We are very grateful that Faber is helping us close this gap again part of the way. An important building block for also being able to offer our just under 200 children and adolescents and ca. 100 “active” and “senior” players reasonable conditions in the future. To find support so quickly and easily is not to be taken for granted. Club work usually means going from door to door.”

Amongst other aspects, the sponsoring also includes jerseys for the 1st team of the Karlsberg League Saarland, the U19 of the Upper Saar Youth Development Association (A1 youth team of the U19 club league) and a grant for over 200 tracksuits for all the youth players of the club. Besides perimeter advertising and ad placement in club media, this will ensure a broad presence for Faber amongst all the players of the teams. The new jerseys will put in their first appearances at the end of July in the away game against the association football club Spvgg. Quierschied and at the local derby against SV 09 Bübingen, which experience has shown to be one of the club’s greatest draws, with just under 1,000 spectators sharing in the excitement occasionally in the past. Faber is not excluding a long-term continuation of the sponsoring over and beyond the three years agreed now.

“That a company as important as the cable wholesaler Faber is entering into a sponsoring partnership with the Auersmacher sports club is an affirmation of our good youth and club work for us. But at the same time, it is also an incentive for all of us to continue doing justice to the demanding requirements in the sport and our social engagement in the future”, comments Manfred Berger, SV Auersmacher’s deputy managing director.

The company is also supporting further sports clubs across Germany. In the beginning of May, the cable wholesaler had invited clubs and teams in all sports disciplines up and down the country to apply for sponsored jerseys. The teams taking part could upload photos to the company’s website, describe why they should be provided with a set of jerseys, and face a public vote. 10 sets of jerseys altogether will be going to clubs in the Saarland, Lower Saxony and Baden-Württemberg, amongst others, at the start of the season.

Over and beyond this, the company is also engaged in the medical field, with its own Klaus Faber Foundation donating 1.6 million euros in March of this year for the construction of a new hybrid operating theatre at the Caritas clinic St. Theresia in Saarbrücken.

Faber CEO Joachim Czabanski also wants to strongly champion the region in the future. “But for now, we are first of all eager to see what the teams look like in our jerseys, and wishing all of them the best of success for the season.”