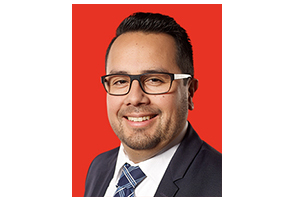 Behind every company are people. Employees with a broad range of different interests and individuals who prove their social engagement like our colleague Philip Stegmaier.

Our field representative Philip Stegmaier has been actively engaged in the SG Mudersbach / Brachbach football club for many years and trains the F-juniors there. While on a client visit at our customer SEB Technology GmbH from St. Wendel he met Marko Külpmann, league controller in the Saarland football association. It stands to reason that they hit it off. Football connects, and all the more so if it's for a worthy cause.

The "Sternenregen" charity project, an initiative by RADIO SALÜ in cooperation with the Protestant and Catholic Churches that is aimed at helping Saarland families in need, also included the so-called Nikolaus ("Santa Claus") Cup last year for the very first time. The junior football tournament generated a sum total of 1,000 euros in profits, which the organizers handed over to the "Sternenregen" campaign as a donation.

On December 3, 2016, the Nikolaus Cup will now be going into its second round in the Bruchwaldhalle sports hall in Freisen. With one innovation: The teams from the Saarland such as the FC Freisen or FC St. Wendel youth teams, for example, will be competing against the F- and E-junior team of SG Mudersbach/Brachbach this year.

The young footballers from the Palatinate will experience the hospitality of the Saarland. The hosts are providing for their accommodation and catering (famous for never being scant in the Saarland). The next meeting is already planned for the coming year at Whitsun in the Palatinate, when our teams from the Saarland will be paying a return visit.

We find: A great event that is not only plenty of fun for all those involved, but also serves a good cause.

Nikolaus Cup on Saturday, 3/12/2016 in the Bruchwaldhalle in Freisen

SEB has been part of Faber Kabel's customer base for many years. The company is engaged in the business segments of supply engineering, renewable energies, mast production and lighting technology. The lighting for stadiums and sports venues is also one of the services provided by SEB.

About the "Sternenregen" charity project

The aid programme has been in existence since 2004. Sternenregen's patron is Minister-President Annegret Kramp-Karrenbauer. In concrete terms, the "Sternenregen" campaign concerns the needs of children in the Saarland who are living in poverty. These can range from layettes, school materials and clothing through to support in cases of illness, disability and poverty-related social isolation.